Investing in Quality: My 2020 Journey 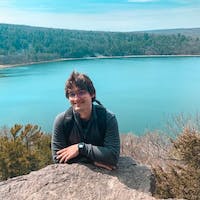 I rolled into 2020 like anyone else, with hopes and dreams for what I'd accomplish, the places I'd go, the habits I'd kick, the habits I'd start. I didn't watch the news much so COVID really snuck up on me. Before I knew it, I wasn't coming to the Madison office anymore for my Support job at Fetch Rewards. Instead, I was sitting on the couch or the bed while helping users, wondering how this all was gonna go. Would I adapt? How would my fiancee and I get along while working the same job at home?

Turns out I didn't have a whole lot of time to spend working on Support tickets from home, because my final interview for a Quality Assurance Analyst role over Zoom had gone extremely well, and I was about to be promoted to a new team. Things were looking up! Sam (my fiancee) and I were excited about my switch and the opportunities that might open up for us, like maybe moving closer to Madison at some point, going on trips, etc. We didn't know just how restrictive this year was going to be for us, though.

The most heartbreaking aspect of the year was having to cancel our trip to Europe. We paid for everything upfront in February. We had planned to fly into Sevilla after spending a day in Paris sightseeing. We would have spent 1 week in Spain in an AirBNB with a gorgeous view. We would have visited all the places I went to when I was studying abroad: the school, the restaurants, the bars, the clubs, the monuments, and beautiful tourist locations, and especially the gelato stands. Due to America being awful at handling the pandemic, nobody in the United States would be allowed to visit any EU countries until further notice. We had to cancel the whole trip once we learned that and some flights didn't issue refunds even if travel insurance was purchased. It was a pretty disillusioning moment for us.

Thankfully, we ended up taking a trip anyway, but it was instead to Door County. It's no trip overseas, but it was awesome to see all the beautiful fall leaves. It was a cozy experience, our hotel had a sweet view of the lake, and it was one of the best vacations I've ever taken. Who knew? I never thought a vacation close to home could be just as good as one far away. We almost didn't take a trip, but I'm glad we decided to do so anyway. We were fortunate, too, that the city was so sparsely populated and the hotel we chose seemed like it had very few guests. Made social distancing a piece of cake!

That wasn't even the best aspect of 2020 for Sam and me. In September, we got engaged!! I've wanted to do this for so long, but at first, I put it off because she wanted to wait until we had been together for at least a year and a half. It'd been 2 and a half years by the time I proposed to her at the Anderson Japanese Gardens in Rockford, IL. She looked positively radiant that day, so beautiful. It was cute, it was on a bridge on a bright sunny day in a beautiful garden where we were one of only a few people there. It was perfect. And I couldn't be happier that it's her. So by the time we went to Door County, we were already engaged. Almost like it was a tribute to our history together.

As far as career growth, mine took off. I got promoted to QA in March and then again in November, which included a fun title change to Software Quality Inspector, but no change in responsibilities. I went from being a total QA newbie in March to a DRI (directly responsible individual) QA on the anti-fraud pack. I'm even officially on track to be moving over to the automation pack in 2021. Not sure when, but I guess that's mostly up to my ability to move & learn quickly, and the team's need for me as a manual QA by the time I'm ready to move over. Just thinking about how I've proven myself capable of learning the SDET role in a matter of 7 months blows my mind. I'm not sure when that'll all come to fruition, but I know 2 things:

Most of the year was focused on career moves, to be honest. Here's a list of things I did that were Dev/QA-related:

Naturally, with so much energy being spent on coding, I didn't really make any dents in my health goals. I did manage to do these things during 2020:

Of course, then this happened:

To be fair, it was an intentional decision to ignore my health for the sake of career growth after a certain point. When the weather got colder and work got busier, I just said to hell with trying to balance everything. I would rather make progress in 1 area of life while ignoring others than make minimal progress while attending equally to all areas of life. In 2021 that debt comes due, however.

I'm dedicating 2021 to fulfilling the health goals I've always put on the backburner. And by always, I mean I've been wanting to do these things since before coding was even on my radar. I started learning parkour in 2010 when I was 16. I'm now 26. The upsetting thing for me is my fitness has either stagnated or declined since around 3 years into my practice. The novelty wore off for me after the first 2 years and then I slowly stopped seriously training. At this point in my life, parkour is all but completely off my radar, even though I know I enjoy doing it when I make time for it.

What I think happened was around 2012/2013, I decided to focus more on college. High school was easy enough and I was bored enough where it was a clear choice to go do parkour at every opportunity. In my early years at college, I was still entertained by exploring the campus for new parkour spots, and starting the parkour club on campus. Once I started overcommitting to college coursework and was obsessed with learning about personal transformation (mindset stuff, unlearning garbage life advice and making social interactions win-win, etc.), I think I stopped prioritizing parkour as the primary way to get ahead in life. My physical fitness was no longer the best way for me to get what I wanted in life, so it came second, or third, or even last sometimes on my list of priorities. Fast-forward to when I had to take a gap year in college in order to be able to pay for my last semester (otherwise I'd have had to drop out), all I thought about from that point was money and how to get more of it faster. That ultimately led me to web development and the rest is history.

In other words, working out and eating right just didn't do anything for me that I desperately needed during that years-long stretch of my life, and there was always a competing interest that it came in second to.

After all this time, I'm ready to finally get back on the horse. I think I'm in a safe enough spot in my career where it's time for me to switch gears to undo the harm I've done to my body in the pursuit of my education, extracurricular endeavors, and career goals.

I've put on 50 pounds since I started parkour, and most of it is likely not muscle. I started noticing most of the weight gain when I was taking that year off from college, and I think it could have been stress weight if I'm being honest.

I've still never done a single quality muscle-up (look it up, they're so cool!) despite dreaming of achieving that goal since I started parkour.

I've never had a sustainable healthy lifestyle. I've actually gotten laxer about what I'm allowed to eat and I spend way too much on food as a result (lots of takeout, lots of snacks).

I just think it's not gonna get any easier at this point, and I'd like to make this lifestyle change while it's still something I feel I can achieve. And I don't want any regrets. I know I'd regret missing out on the level of physical ability that'd let me scale rock walls and leap across rooftops with ease (in theory). Just to add context, I love to play the Uncharted series and Mirror's Edge games on Playstation and have always dreamed of having the ability to do things like the characters in those games. It's what inspired me to start parkour in the first place (specifically Mirror's Edge; I found out about the Uncharted series later on down the road). Just seems like I'd be doing myself an injustice if I didn't put in the work to actually do this, since I've already dedicated so many years to thinking about it.

In summary, 2020 was clearly a year meant to be about career growth. That happened and I'm proud of myself. But I sacrificed my health goals in order to accomplish that. Call it regression or opportunity cost, but either way, I made a tradeoff. Sam and I are also moving to a better environment that perhaps will inspire us to do more for ourselves than we felt comfortable doing here in our tiny 1-bedroom apartment. But it cost an arm and a leg to do it, and it was almost impossible to do as a result of coming to this conclusion only 2 months prior to the intended move-in date. We were very lucky it worked out.

In 2021, I'm planning on putting my health first. I'm planning on putting regular exercise ahead of regular coding practice. Regular cooking ahead of regular QA professional development. I'll take more of an ad-hoc approach, "learn as needed", to anything I need to do in order to make my SDET transition. I'm going to switch away from my "anything goes" lifestyle once and for all. I'll have boundaries that I respect and that can reasonably withstand the test of time so I don't burn out like every other time. If I don't get those "sustainable boundaries" right the first time, I'll tweak them instead of throwing in the towel. It's a lifelong learning process so I'm in no rush.